Meetings in Moscow – A short but exciting visit to Mother Russia

Hugo Slimbrouck, our Director of Strategic Partnerships, together with BBT Online (one of our media partners) and a group of planners with potential took a famtrip to Moscow. It has been a short but intense visit, organised together with Ovation Russia,  Brussels Airlines and Ritz-Carlton. Once back to Europe, Hugo shared with us a first impression of what Moscow has to offer as a meeting & incentive destination, its most prized and surprising venues as well as the local cuisine and hospitality. It only took a couple of hours to convince the delegates of the city’s MICE value. Moscow has an amazing amount of assets. Let’s find out what they are together. 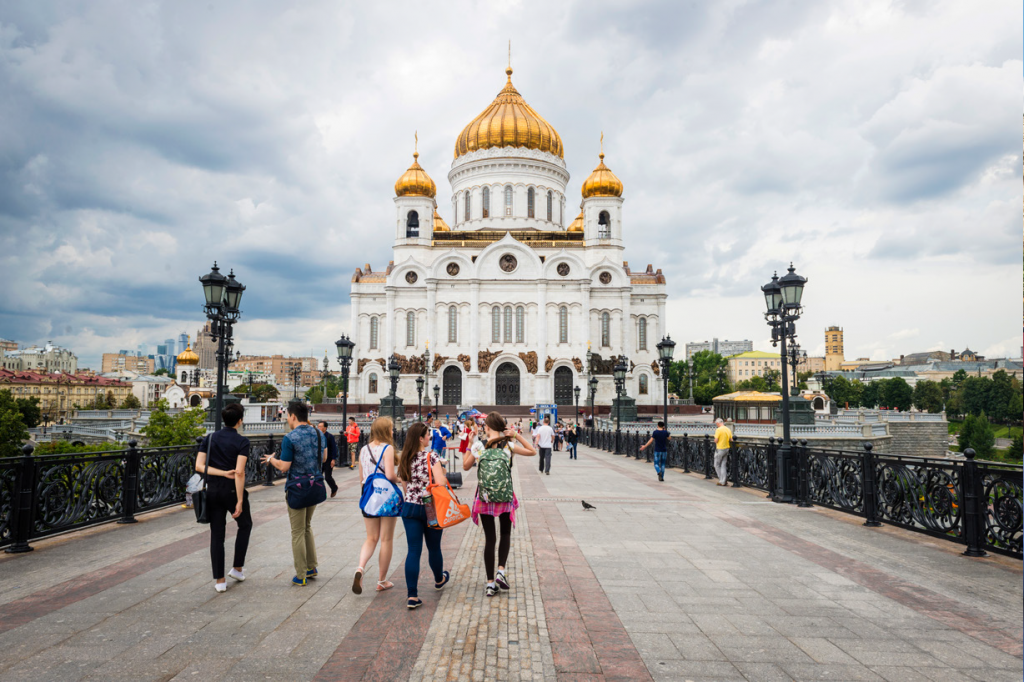 With geopolitical tensions rising, Moscow might not be topping everyone’s list as an event or incentive destination these days. Practically no one in our little group of travellers had ever visited the Russian capital before. This would truly be a first experience for everyone – for me as well. Everything I knew about Russia and its people came from books, movies and the internet. Would my personal experiences debunk the usual clichés? 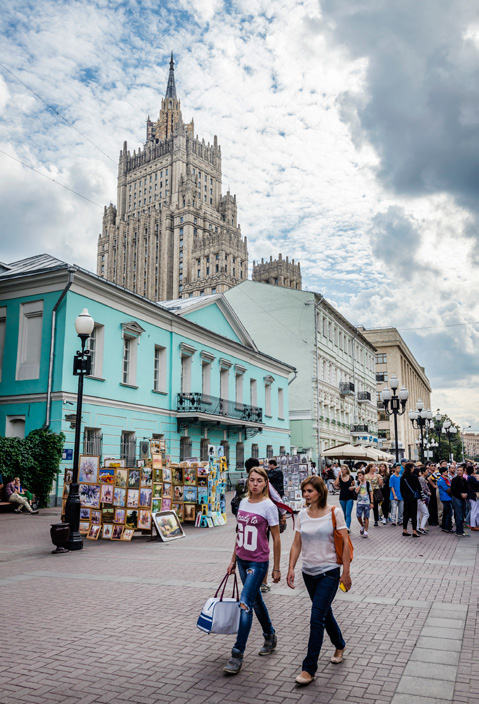 Moscow is surprising in many ways when you first arrive. First of all, it is huge: not only the city itself but its buildings as well. Nothing is small in Moscow. The building style of the historic centre is larger than life and sometimes a bit bombastic, but somehow it fits the destination perfectly. The architecture can be imposing but beautiful at the same time. Quintessential examples are Stalin’s Seven Sisters: seven monstrously gigantic, stone skyscrapers spread out over the city centre that could have only been built in Russia. Most of them are around the 200m mark in height and seem to come straight out of a Batman movie, but they make for a unique and unmistakable skyline.

What also took me by surprise was how immaculately clean the old town is. You’ll have difficulty finding a single piece of candy wrapper on the sidewalk. They even had sprinkler systems installed under a couple of the main roads to clean them when needed. The city offers lots of open space as well. Moscow is impressive and sometimes a bit overpowering, but it doesn’t press down on you. You’ll always find lots of breathing room and vistas to enjoy. The capital also comes with an amazing amount of parks and greenery. Ranked based on the total size of its parks – it can be considered one of the greenest cities on the planet. You can cruise down the Moscow River for kilometres surrounded by little more than trees on both banks.

Moscow as a MICE destination

Taking a look at some facts and figures, Moscow has an impressive resume. It calls itself the world’s northernmost megacity. More than 12 million people live within the city limits, making it Europe’s second largest metropolis after Istanbul but way before Paris, London and Berlin. Moscow – logically – is Russia’s economic powerhouse, generating more than 20% of the country’s GDP. This makes it a vibrant city; a magnet for resources and talent, which in turn makes it a global, business, political and scientific centre hosting thousands of events.

Moscow has three international airports, more than 30 convention and exhibition venues and more than 80 conference hotels. Combine this with the best universities & research labs in the country, 237 theatres, more than 300 museums, close to 300 malls, more than 3,000 restaurants and a very well developed tourist industry, and you get a prime destination for both events and incentives. 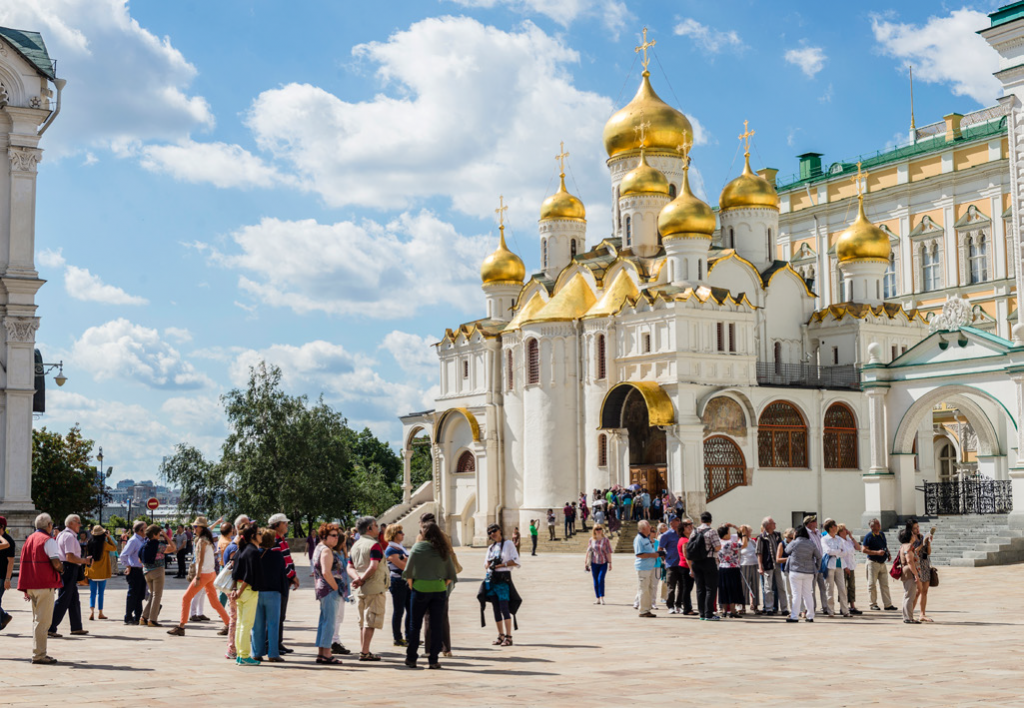 The city is currently remodelling itself to face the 21st century. Not too far away from the old town, Moscow International Business Centre is being built as we speak. Six of the ten tallest buildings in Europe are located here, in a skyline looking more like an Asian megacity than a historic European capital. When finished, the area will combine business activity, living space and entertainment in its role as the city’s newest hub. 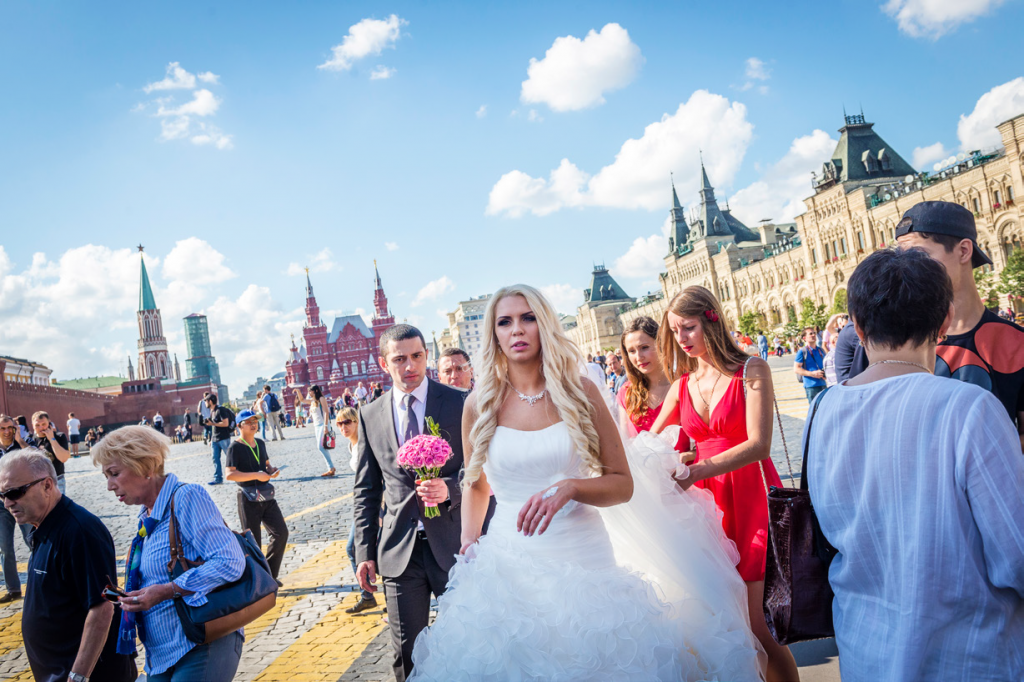 Straight from the airport, before checking in to our hotel, we were to visit the quintessential Moscow sight: the famous Red Square bordered by the walls of the Kremlin and the gorgeous St. Basil’s Cathedral – which, oddly for Moscow, was surprisingly small. The Red Square is remarkably and unexpectedly cosy: full of tourists making pictures & people getting married. Compared with its Chinese counterpart Tiananmen, which is essentially an almost empty urban desert full of security checks, it is a breath of fresh air. 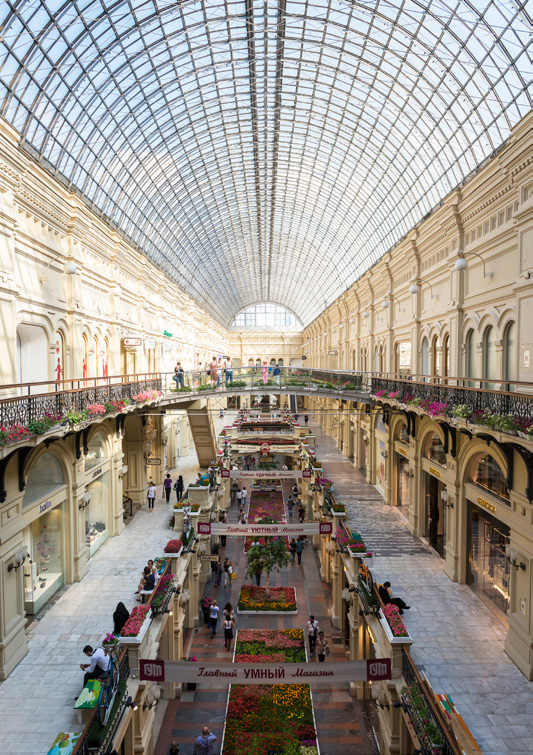 Across from the Kremlin gates lies the GUM store, possible the most beautiful shopping mall I’ve ever seen. Behind its beautiful facade you can stroll through long, multi-floor passages full of shops, cafés and bridges filled with terraces. Everything is covered by a large, arched glass roof. The GUM Store comes with a demonstration hall on one of the top floors looking out over the Kremlin. This makes for a fancy and classically furbished event hall for large groups on one of the most iconic spots in Russia. You could do worse.

Speaking of the Kremlin: it’s also different from what you would expect. The outside walls look kind of menacing, it’s true, but inside everything is lofty and green. Besides of course a string of government buildings – not to be entered – you can visit several golden domed churches, the world’s largest cannon and the world’s largest bell (broken, sadly). You can even take a look at Putin’s helicopter pad. Don’t forget to be on time for the changing of the guards at the gate – it’s like Buckingham Palace without the silly hats. 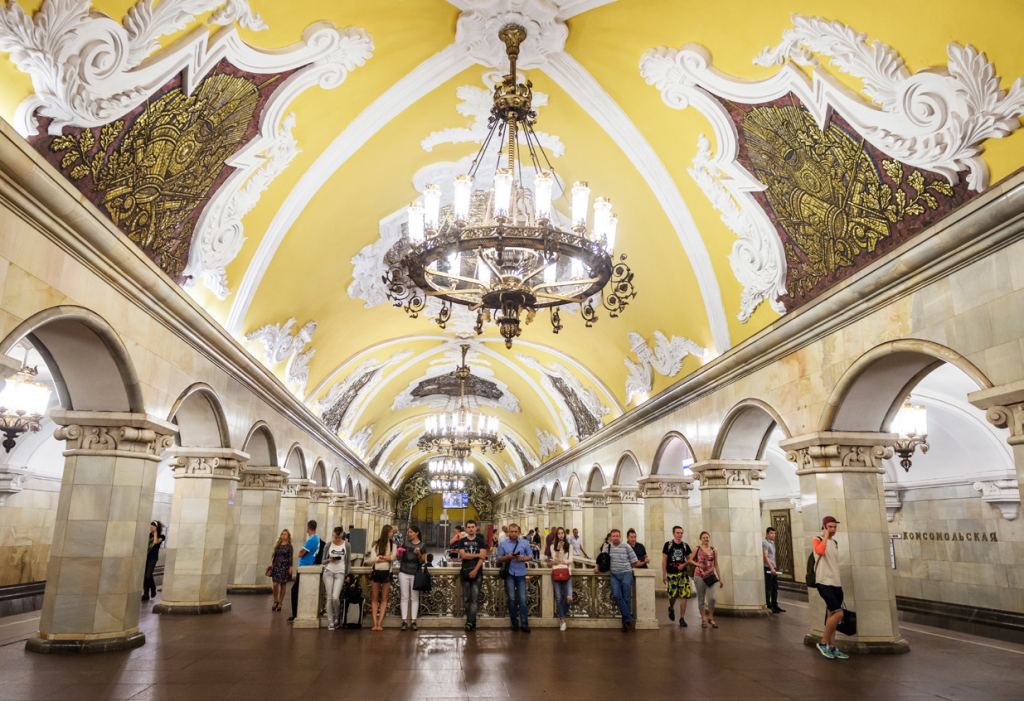 Strangely, some of the most surprising and beautiful sights in Moscow can be found deep under its surface. The subway system for example. Opened in the 1930s, some of its more famous stations look more like ballrooms than metro stops. Large chandeliers, classical columns, vaulted and wonderfully decorated ceilings: it’s superb. Think about that next time you slide into a depression waiting for your ride in the dreary Brussels subway. The trains are abundant and on time too. Taking the metro is probably the easiest way to get around in Moscow.

Even more surprising and by far the most unique venue we visited during our stay was Bunker 42: a nuclear bomb shelter commissioned by Stalin in the early fifties – more than 60m under the surface in the middle of the city centre. It’s covered by a fake concrete residential building and was completely equipped with everything needed to survive a direct nuclear blast, including personal living quarters for Stalin and a so called ‘war room’. After the cold war ended, it turned into a museum, but now you can organise all sorts of events down there: parties, large or small meetings and conferences. All of them in very original and well furbished halls. There’s even an underground paintball area. Honestly, this venue and its possibilities are amazing, and it doesn’t even feel claustrophobic. 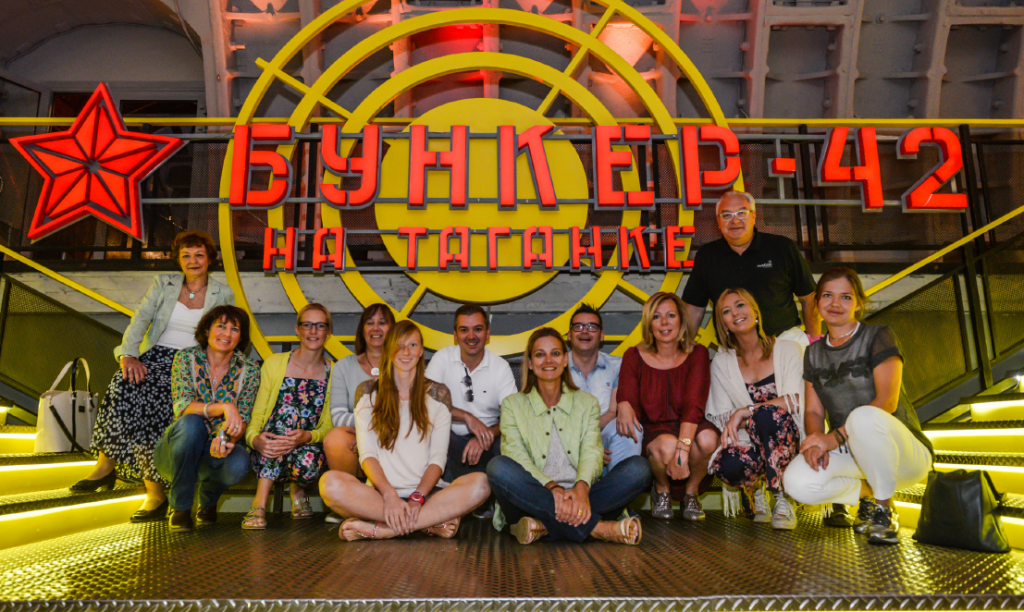 We had our last dinner on a River Palace Cruise. This means enjoying multiple courses on a luxury dining ship while the Moscow scenery floats by. It’s a great way to get your bearings as well. Moscow is so vast it can be a bit overwhelming. Taking a slow, relaxing look at it from the water while the sun sets over the city’s golden domes gives you a good idea of the bigger picture. You’ll sail past modern skyscrapers, historic quarters and people picnicking on the green river Banks – all with a refreshing glass of wine by your side: a great way to end a first visit to Moscow. It will not be our last.

For further details on corporate and incentive events in Moscow,  please contact us or visit Ovation Russia

Text and Photography by BBT Online
Published on www.bbtonline.eu

Budapest - A high-speed famtrip to a wonderful city