Have you ever heard about the stray black mutt who became the idol of Madrid? 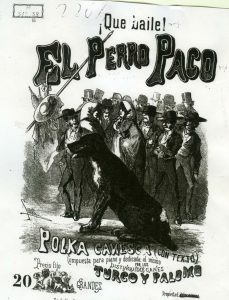 In the 1880s, Madrileños went crazy about a stray dog who quickly became a rockstar in the city. The animal used to visit the legendary Café Fornos, one of the most elegant restaurants of the Spanish capital at the time. Books were written about him and he was allowed in restaurants, bullrings, and gardens.

The legend begins in 1908 at Café de Fornos, where the aristocrat Marquis of Bogaraya started to share his dinners with this little stray and baptised him as “Paco”, diminutive of Francisco. Paco was very happy to eat the aristocrats’ leftovers and started to show up at the restaurant whenever the Marquis was present.

Slowly Paco began to appear at other cafés and restaurants too. And wherever went, he was allowed to stay.

Of all the possible 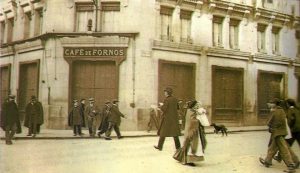 entertainments in the city, soon Paco found his favourite: bullfighting. The dog used to sit among the public, howling and barking if he disliked the torero’s performance. One day, while attending a particularly bad performance by a young matador, Paco jumped into the ring and started to bark at the young man, who finally lost his patience and stabbed him to death. The crowd went mad at the bullfighter, who barely escaped from their fury.

But Paco’s popularity didn’t finish with his death. Leaving aside the quantity of products named after the little stray (from chocolates to magazines), his body was buried at the city’s park of El Retiro. The exact location in the park is still unknown.

You may wonder how we know this secret story… It’s because we travel all around the country to make sure we don’t miss a thing about Spain. Get in touch with us or visit Ovation Spain DMC to learn other secrets and more about our destinations!